Between the Ideal and Artistic Practice. On Research into Ancient Sculptural Polychromy

Antiquity is often synonymous with white marble. Such are the general expectations when visitors enter 21st century museum galleries hosting ancient sculpture. Yet, ancient marble sculptures have never been actually white. They were originally fully painted or otherwise coloured, and today they pose as controlled ruins build by decades of restorations, de-restorations and preservation manifested as encrusted layers and patina. As such they express the modern ideal, meaning ideas of aesthetics developed by 19th and 20th century museums. They do not reflect the ancient artistic practice or the ideas of aesthetics that once guided the ancient craftspeople. The experimental reconstructions -meaning painted copies of authentic sculptures- are therefore often met with suspicion and sometimes frustration, because they explore the artistic practice above the ideal. Unlike the ancient originals, the painted copies are not in any way visually authentic, but fully polychrome, and layers of paint are often applied in thick, opaque layers, thus failing to meet the ideas of aesthetics on behalf of the modern viewer. While the reconstructions serve as seminal research tools in the academic exploration and experimentation with colours on white marble sculptures, they have no precedents in the history of art. This article will therefore explore how reviews of these experimental reconstructions echoes ideas of aesthetics originating from the 19th century, and how a lack of confronting these ideas ultimately empowers the reconstructions with the potential to impose a much-needed material diversity to 21st century classical sculpture galleries. 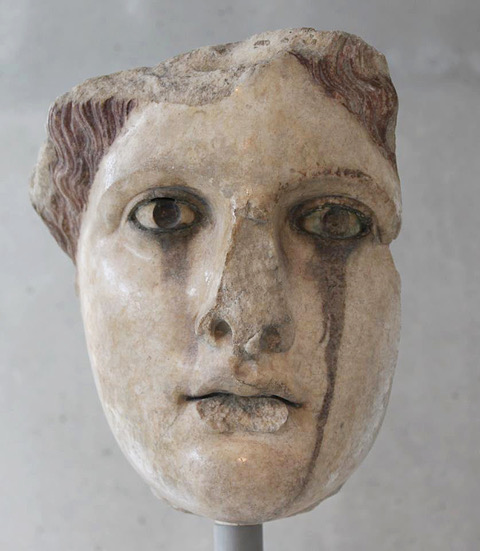